In the Shell Auditorium, Randy Paris steps up to the podium to present his pitch. A hush falls over the crowd as hundreds of angel investors and venture capitalists train their eyes on the University of Chicago Booth MBA, who has 15 minutes to make his business case.

Paris, CEO of coffee startup BrewBike, and his team have made it to the final round of the 19th annual Rice Business Plan Competition (RBPC), the world’s richest and largest student startup competition. Alongside 41 other teams from across the globe, for three days Paris and his team have vied for what was ultimately a record $2.9 million in prize money to invest in their growing businesses. The stakes are huge. 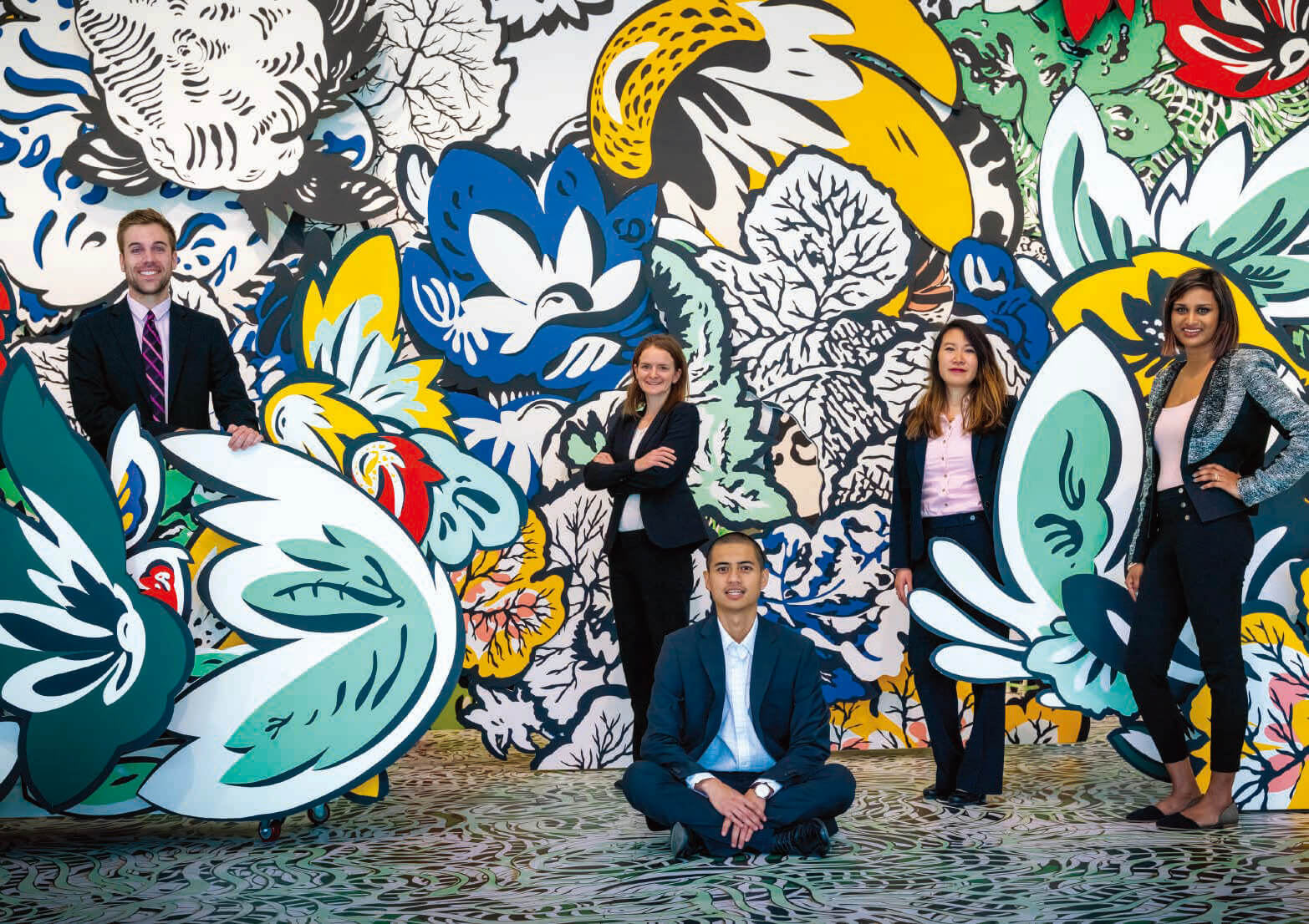 “You can only keep driving if you have gas in the tank,” says Paris before the competition kicks off. His team of four includes BrewBike founder Lucas Philips from Northwestern University. The company delivers cold brew coffee in a more convenient way to students at Northwestern and UT Austin through a business model that’s 100% student run. Their goal is to expand to dozens more universities across the U.S.

After closing an $850,000 seed round in September, BrewBike applied to RBPC to further fuel its expansion. “Getting ready for a competition like Rice is such a valuable exercise in and of itself,” Paris says. “You’re making the case for why your company makes sense. And once you’ve convinced yourself, you can convince investors.”

Paris and Philips were among an impressive group of teams at RBPC this year, from the U.S. to the U.K. to Singapore. The event is hosted by the Rice Alliance for Technology and Entrepreneurship and the Jones Graduate School of Business.

With enthusiasm, props and catchy slogans, teams presented their business solutions to some of the world’s most pressing issues — heart disease, cancer, student loans, clean drinking water and immigration. For months leading up to the event, they worked on refining their financials, their sales and marketing plans, and their exit strategy.

This year’s team from Rice, LilySpec, has set out to overhaul the vaginal speculum, making the OB/GYN experience a more comfortable one for women. During pitches at RBPC, Rice MBA student Joanna Nathan waved a metal speculum through the air.

“This device has been torturing women for the past 150 years,” Nathan tells judges, all volunteers, as she opens the device. “It’s in serious need of an innovative, patient-centered overhaul.” LilySpec took home $29,000 in prizes, and won best elevator pitch.

Personal experience influenced other teams’ products as well. NABACO from Texas State University applied to RBPC to help raise $500,000 for its Natuwrap coating, a spray that extends the shelf-life of fruits and vegetables. NABACO COO Damilola Runsewe grew up in Nigeria, where food traveling long distances often spoils. “The level of the competition here is absolutely world-class,” Runsewe says. “Just being here is stimulating. The hardest part was seeing it come to an end.”

Caleb Carr, CEO of Vita Inclinata Technologies from the Mitchell Hamline School of Law, developed the Load Stability System (LSS) after his search and rescue teammate Don died from a heart attack following an unsuccessful airlift. The LSS prevents the wild swing of precious passengers and cargo as they’re being airlifted during helicopter operations.

“We know what our mission is,” says Carr, who was finally accepted into RBPC this year after four unsuccessful applications. “It’s to ensure people won’t die because of the swinging. Every time I go on stage, I’m focused on that life-saving aspect.”

The best 42 minutes in capitalism

A launching pad for innovative companies across industries — technology, energy and life sciences — RBPC provides participants with invaluable feedback to hone their pitches and ultimately attempt to launch their businesses.

In a given year, more than 300 teams apply for the 42 spots. In classrooms, over box lunches and in the hallways, teams get ample opportunity to network with investors. Business cards are exchanged, meetings are scheduled.

The competition kicks off Thursday afternoon with a practice round before the rapid-fire Elevator Competition in the Shell Auditorium. “They say the Kentucky Derby is the best two minutes in sports,” Rice Business Dean Peter Rodriguez tells students as they gear up to deliver their 60-second elevator pitch. “Well, this is the best 42 minutes in capitalism.”

On Friday, teams split into seven tracks, present to judges, then address questions during a Q&A. One crowd favorite, Resonado, played the song “Englishman in New York” by Sting for the judges after the team’s slide presentation. “Join us in replacing all the speakers in the world,” CEO Brian Cho told the judges, holding up the flat core speaker he and his father developed.

“It’s almost like a final exam,” says Paris, who handed out cups of cold brew coffee before BrewBike’s pitch. “You can get a question about anything in the textbook. You have to be prepared.”

Friday afternoon, each team receives 15 minutes of feedback. At an evening reception, the 15 semi-finalists are announced — the top two from each track, plus the highest-scoring third place team. Saturday morning, semi-finalists compete across three tracks, delivering their pitches yet again. The remaining 27 teams compete in a Wildcard Round for a spot in the finals.

At noon on Saturday, in a standing-room only Shell Auditorium, the finalists are announced. Then teams have one last chance to convince the critics before the winners are revealed Saturday night at a company showcase and banquet.

The GOOSE Society of Texas provides RBPC’s top, $350,000 prize, and often upsizes it. The winner is invited to pitch to the entire GOOSE group, a meeting that many times results in millions more in funding. GOOSE has invested more than $20,000,000 in a dozen RBPC companies, more than 40 percent of its total capital invested. Four companies have exited, returning more capital than GOOSE initially invested.

GOOSE co-founder Jack Gill, founder of the Palo Alto-based Vanguard Ventures, has judged at RBPC since 2005. “I love to support entrepreneurs at the core level,” says Gill. “RBPC is like the Super Bowl. Prizes are big, the competition is tough, and the process is very intense. My favorite part is meeting all these dynamic entrepreneurs, the fun, the excitement when you see all that energy and aspiration in the room.”

"The Rice competition changed our lives. We refer to our company as pre-Rice and post-Rice. The competition sent a message that we can build something really big; it gave us even more confidence. It’s something we’ll never forget.”

In addition to GOOSE, more than 200 other corporate and private sponsors support RBPC. Even teams that don’t make it to the finals have the potential to walk away with hundreds of thousands of dollars in prize money.

For judges, RBPC is not only an investment opportunity, but also a chance to reconnect in person with colleagues from across the world. Of the 300 judges this year, more than 26 percent were women, up from six percent in 2001. “We’re on our way to 50 percent,” says Rice Alliance Managing Director Brad Burke, who served as the competition’s host and emcee.

CISCO, which sponsors the $100,000 CISCO Global Problem Solver Prize, first partnered with RBPC in 2016. This year it sent seven judges to the competition. “Venture capital is an area that’s underinvested,” says Mary de Wysocki, senior director with corporate affairs at CISCO. “We were evaluating incubators globally, and one that rose to the top was Rice. I always feel the pool of talent is really high.” 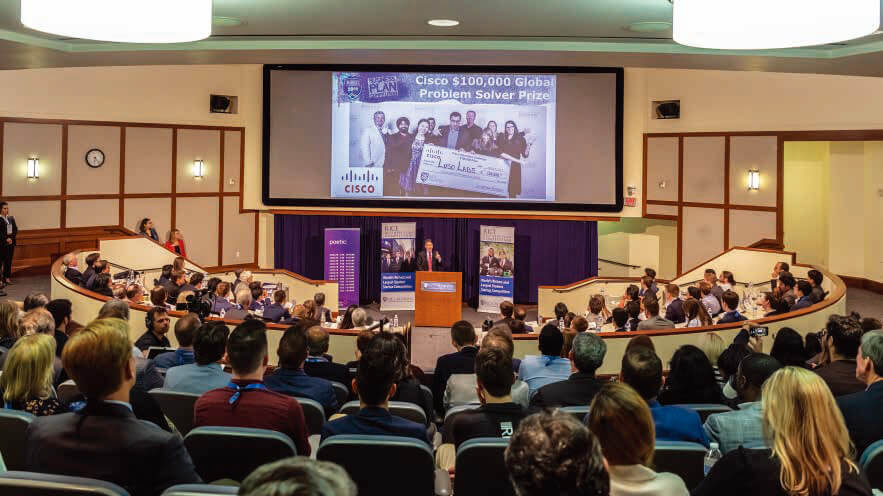 This year, CISCO awarded its prize to Rhaeos, a Northwestern University team that’s developed a wearable sensor to help better monitor patients with hydrocephalus, a condition where excess fluids builds up in the brain. In 2016, CISCO chose Neopenda from Columbia University, which makes sensors to monitor newborns. Last year, de Wysocki visited Neopenda’s trial in Uganda. “It was life changing,” she says. “Young people care, and you see it in action in some of these startups.”

Diana Murakhovskaya, principal and co-founder of the recently-launched The Artemis Fund, Houston’s first, female-focused fund, says Houston is the place to be for founders. “It was great to see so many companies with female leadership,” Murakhovskaya says.

This year’s $100,000 Artemis Investment Prize went to Zilper Trenchless from the MIT Sloan School of Management, which is working to reduce the cost of infrastructure by developing new technologies related to water pipeline construction.

Since 2001, when nine teams competed for just $10,000, RBPC has seen more than 229 competitors successfully launch their ventures. Past competitors have raised nearly $2.3 billion in funding and created more than 3,000 new jobs. Thirty-two companies have seen successful exits valued at more than $1 billion.

“The competition helped us get that initial leadership and funding together,” says Emma Fauss, CEO of Medical Informatics Corp, Rice’s 2013 team. “Going out into the world, we felt we could answer any question.”

Fauss’ company develops technology to help clinicians focus more on patients and less on documentation. Her team didn’t place at RBPC, but they still walked away with $28,500 in prize money. Days before this year’s competition, Medical Informatics announced it had raised $11.9 million in Series A funding.

Samir Mayekar, CEO of Nanograf, a battery technology company, won RBPC in 2013 when he was an MBA student at Northwestern. His team took home $911,000, which grew to over $1 million in the months following the competition.

The company has expanded from three students when Mayekar competed at RBPC to now more than 20 employees across three continents. Nanograf is working with Ford, GM and Chrysler, and it’s on the cusp of commercialization. “The Rice competition changed our lives,” says Mayekar, who still has the giant foam check they received tacked up on the wall in his office. “We refer to our company as pre-Rice and post- Rice. The competition sent a message that we can build something really big, it gave us even more confidence. It’s something we’ll never forget.”

Saturday night at the Westin Galleria, investors chat with teams as they browse their tables at the Company Showcase. Later, in the ballroom, Houston-based street artist Dual puts the finishing touches on an original piece of art he’s created for, and during, the competition.

The 2019 finalists — running on fumes — huddle on stage. An excited chatter spreads across the room as the winners are announced. In fourth place, Rhaeos ends up with more than $450,000 in prizes. Fifth place winner Zilper Trenchless takes home $435,000, and BrewBike takes sixth, bringing home $100,000.

“This experience was one of the most exhilarating I’ve ever undertaken,” Paris says.

GOOSE upsized its prize once again this year, handing out an additional $925,000 spread across five teams. The OWL Investment Group also upped its prize money and handed out $400,000.

Resonado and Vita Inclinata stand side by side as the second-to-last envelope is ripped opened. Cheers erupt across the ballroom. Resonado takes second place, earning $425,000 in prizes. Vita Inclinata is the first prize RBPC 2019 winner, walking away with over $550,000 in cash and prizes, including the chance to ring the closing bell at the NASDAQ in New York.

“Winning Rice was not only a great catalyst, but also a great validation for our technology,” says Carr. “You can literally transform your business over three days. Rice is very much catapulting our opportunities.”

Deborah Lynn Blumberg is a Houston-based freelance writer specializing in business, finance and health and wellness whose work has appeared in publications including The Wall Street Journal, MarketWatch, The Christian Science Monitor and Newsday. Previously, she was a reporter at Dow Jones/The Wall Street Journal. (deborahlynnblumberg. com; @dlblumberg)

One year after one of the worst storms in U.S. history, The New York Times reports, “progress in Texas is unevenly distributed.”

It all boils down to this conundrum: Is valuation a science, with well-defined steps and consistent processes? Siddharth Sen ’09 explains.