A conversation with Peter Rodriguez, Abbey Hartgrove and Barrett Moorhouse

One year after one of the worst storms in U.S. history, The New York Times reports, “progress in Texas is unevenly distributed.” Mimi Swartz, an executive editor at Texas Monthly, also wrote in a piece for the Times, “Maybe a year isn’t enough time to make sure that everyone in need gets a FEMA check and that their homes are mold free. It’s probably not enough time for Houston to reimagine itself, either.” But we’re trying. The following is an excerpted conversation with Peter Rodriguez, Abbey Hartgrove and Barrett Moorhouse. 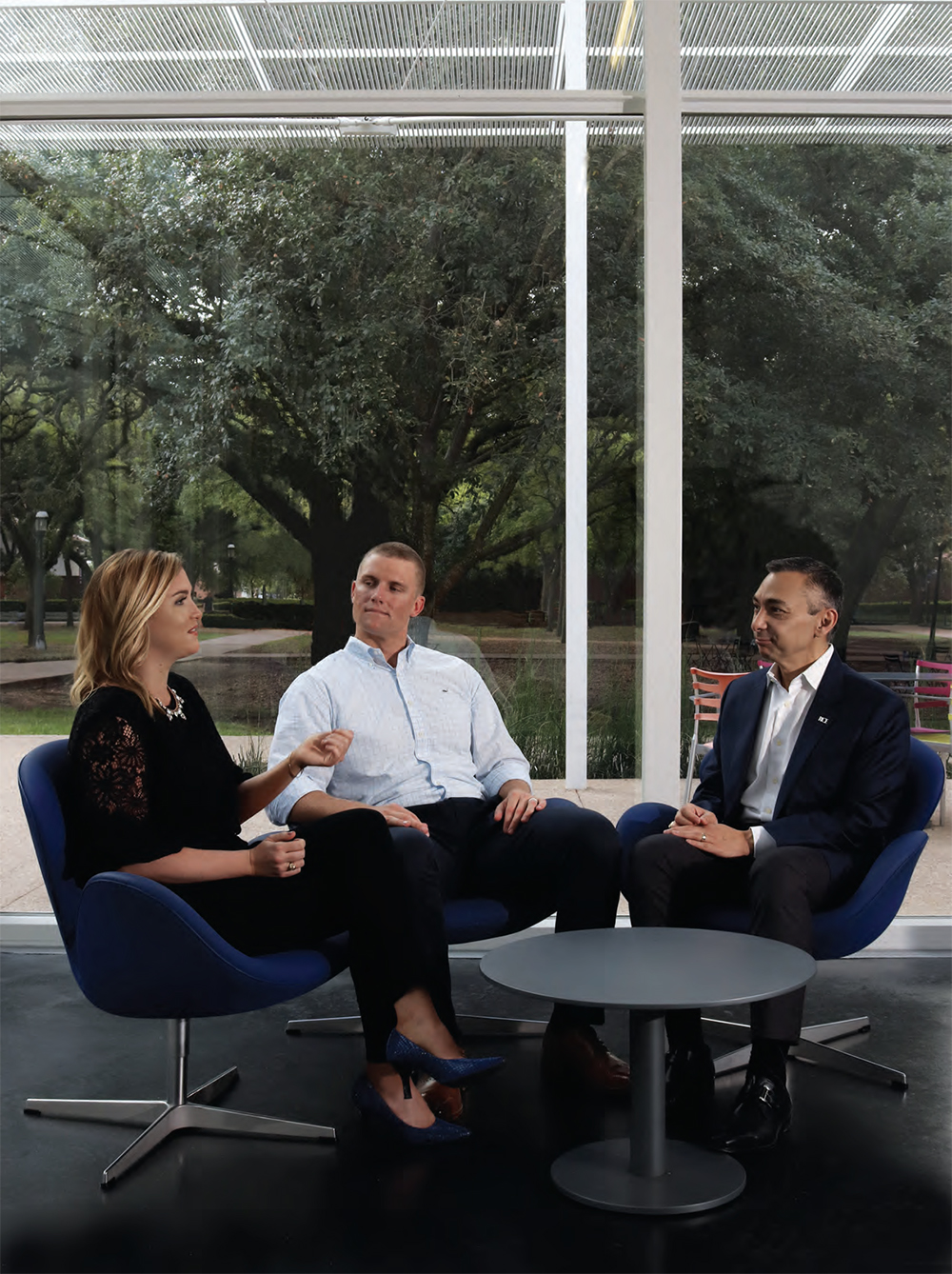 Peter Rodriguez, Dean
Where are we as a school one year after Hurricane Harvey?
Remarkably I would say we are exactly where I would’ve expected us to be. We’ve learned about ourselves as a community. We care about each other beyond the work we do together. To look around the school you would not be able to tell we had that calamity a year ago. We’ve launched a new MBA program. We completed a year of classes. We went on global trips. Business as usual.

What did Hurricane Harvey tell you about the fabric of this place?
It reminded that we had leaders everywhere. People didn’t need or wait for direction. They knew how to act and what to do. All at once, everyone was working to lift up everyone. That’s the biggest surprise about the disaster. We were able to reach everyone so quickly through the networks we formed, even among people who had just arrived.

What have you learned personally and professionally in the year since the storm?
Personally, I think it’s a lesson in humility. We learned how vulnerable we are. You can be made nearly helpless. Acknowledging that and preparing is something we need to do upfront. Professionally you learn — there’s a great quote by Eisenhower — “plans are useless but planning is essential.” Mostly what he meant is that you never know what’s going to happen, but you have to contemplate before something occurs and get everyone aligned behind common objectives. And he meant it’s your best defense. With all of this, still the message is that despite our general recovery as an institution we know that Harvey had permanent effects. So many are still recovering.

Abbey Hartgrove, Associate Director, Global Programs
Your house flooded three times in three years. What was different about the flood with Hurricane Harvey?
With each flood came its own unique challenges and difficulties that make them hard to compare. The extreme impact that Harvey had on the majority of the Houston community brought a level of awareness that did not exist before. The support I had during Harvey went beyond my closest friends and family. I think it also illuminated what families who have flooded before have gone through, and how devastating it was that it was happening again, especially for those who thought things were getting back to normal. The awareness brought a powerful call to action that this city has needed for many years now.

What have you learned about the people that make up Rice Business?
Rice Business is home to my professional life. It hasn’t always been obvious to me that it plays a huge role in my life outside of McNair Hall. This community is part of my family and houses many of my closest friends. It was made very clear during this tragedy that this group of people is special. We have people who truly care about others and want to make a positive difference in lives other than their own. Harvey truly brought deeper meaning to “best and brightest,” a phrase we attribute to those associated with Rice Business.

What did you learn about yourself that you didn’t know before?
The sad truth of the matter is that you don’t always know how important something is to you until it’s gone. With the loss of so many items that meant the world to me, it became very clear that I had a number of sentimental objects that I never thought I wouldn’t have for a lifetime. You are reminded that ultimately things are only things, but also that items that are connected to a memory are precious and irreplaceable. In the end, I was reminded how important it is to surround yourself with people who will support you not only in the best of times but especially in the darkest of times. You learn that it’s okay to be sad, it’s okay to feel that loss, it’s okay to even sometimes feel defeated — but ultimately you learn that even when you feel at your lowest, you are capable of exceeding the highest expectations of yourself.

Barrett Moorhouse, Full-Time MBA 2019, Marine Corps veteran, IREP award recipient, VIBA president
You were less than a month into the school year when Hurricane Harvey hit. What happened?
After helping my mom’s friend rip sheetrock out of her flooded house, I pulled up to a stoplight and saw a guy with a truck and a boat. I said, Can I come along? He said, Sure. For about a day and a half we went house to house all over Houston and Friendswood rescuing people in this guy’s 18’ boat. We tore up that boat pretty good. I see another group doing the same thing in an apartment building off I-10. The DEA, National Guard and Sheriff are helping. I walked up to see what was going on and these two junior National Guard told me they were gathering intelligence. I told them I’d been a captain in the Marine Corps. I had some mapping software on my phone and showed them how to use it, and they talked to the sheriff. The sheriff said, hey man will you run this? The National Guard guys came up and handed me a cell phone with their supervisor on the line. He said he had a couple of trucks and humvees and asked if I could put them to use. I said yes. I do really well in these kinds of emergency situations. I really enjoyed being able to contribute in Harvey. [Barrett went on for two and a half days, leading a crew of soldiers from the Texas National Guard. Using the Texas Navy Facebook page — set up by civilians with boats — they staged the North Star Mall with a convoy of trucks and boats then coordinated with the Texas Navy to rescue stranded families and bus them to the nearest shelters. He slept on the truck, ate MREs and remarked that it felt like being back in the military.]

How did people at school find out?
I didn’t tell anyone. I was on CNN and my mom saw it and told a lot of people. As for school, there was this Rice professor and his wife who were stranded in their car. I helped get them to safety and he found out I was military and told Drew Sims ’18. I think he was the one who told people.

What did you learn about yourself that you didn’t know before?
I realized, looking back a year later, that I missed service in some form or fashion and wasn’t sure how to make that happen in my civilian life. That’s when I decided to take a leap of faith and commission with the Coast Guard Reserve. After graduation, I’ll train for a month in New London, Connecticut. In the event of another Harvey, I can request to be activated. It’s something that’s really important to me.

It all boils down to this conundrum: Is valuation a science, with well-defined steps and consistent processes? Siddharth Sen ’09 explains.

A launching pad for innovative companies across industries — technology, energy and life sciences.