The lights went out at Aman Bhargava’s place in the Rice Village Apartments around 2 a.m. on Monday, Feb. 15. As the day passed, the apartment got colder. The pipes froze, cutting off the water supply. And the temperature — inside and outside — was only going down.

Bhargava, a full-time MBA student in the Class of 2021, hadn’t expected to lose power and water during a Houston cold snap. Luckily, he still had some bottled water left over from his preparations for a summer hurricane that never materialized. But he had no canned food and little to keep him warm in the Arctic indoor conditions that developed as the outage dragged on into Tuesday.

A number of his classmates, he realized, were in the same boat — many of them international students, like him, living in the Rice grad student apartments where conditions were quickly deteriorating. Two emails from Rice Business gave him hope: One said there was still power and water in McNair Hall. The other said anyone who needed help should contact administrators. So he did.

“I reached out and said, ‘Can we shelter at school?’ ” he said. The answer was yes.

Bhargava and his RVA neighbors joined dozens of others who sheltered at McNair Hall the week of Feb. 15, including business school faculty, students and staff, along with members of Rice’s “ride-out team” of essential personnel who stay on campus during disasters. The building never lost power or water during the winter storm that caused widespread outages throughout the region, when temperatures dropped to lows not seen since 1989.

On Tuesday morning, Bhargava channeled his energy into mobilizing the other Rice Business students at his apartment building, compiling their personal details to share with the Rice University Police Department, which approved their plan to camp out at McNair. Then he booked them an Uber, which took an hour to arrive on icy roads — plus another 25 minutes to make the short trip from the apartments to campus, which normally takes about five minutes.

“I’m so glad the driver showed up and was patient,” Bhargava said. “Every time we got to an intersection, it was either closed or too icy, so we had to turn around and find another way.”

When they finally made it to McNair, they faced a new problem: How to feed everyone in the building. Restaurants and grocery stores were closed, and the roads weren’t safe for deliveries in any case. But Bhargava coordinated with Adam Herman, executive director of the Student Program Office, and Joe Garcia of Elite Events Houston, which handles catering for Rice Business. They got in touch with David McDonald, senior director at Rice Housing and Dining, who immediately said the students were welcome to eat at one of the Rice undergraduate dining halls, South Servery, shared by Hanszen and Wiess colleges. Later in the week, Garcia provided meals on site in McNair Hall: enchiladas for lunch on Thursday and pad thai on Friday.

After meeting the basic needs for food, water and heat, McNair became a sort of cold-weather summer camp. Herman — who coordinated the impromptu housing effort along with Rice’s crisis management team, RUPD and other Rice Business administrators — started referring to the building as Hotel McNair for its overnight guests, who were given cots to sleep on, and Camp McNair for those who came by during the day to charge devices, warm up, and take showers.

“The mood with everybody there was kind of a quiet thankfulness,” said Elizabeth Walton, a full-time MBA student in the Class of 2022, who spent two nights camping out in a breakout room with her husband and their dog. “I’m just so grateful to have Rice Business, and that McNair Hall randomly has showers.”

Everyone was still careful to wear masks and keep their distance, but for many students, it was the most in-person time they’d spent with their classmates in a year. No one was in the right frame of mind to do classwork, Walton said, but some played board games and watched movies together.

“It was fun to be around other people instead of alone in your cold, dark apartment,” she said. “There was a lot of camaraderie — we were all in it together.”

“With the way COVID has been, I haven’t been able to meet many first-years. But because of this winter storm, I was able to not only meet but to have meaningful conversations with some of them. It was nice to have someone in the same situation as you are and talk to them about how they’re managing,” said Bhargava.

The “crisis within a crisis” not only brought people together, but it brought out the best in the Rice Business community, said Herman.

Students mobilized to help people in need off campus as well. Professional MBA students supporting a nonprofit called Amel Houston as part of a Capstone course started an impromptu initiative to help those in Houston’s refugee community after the storm.

“What started with few texts quickly became a community initiative, where our efforts coupled with the generosity of corporate sponsors (H-E-B, Target), restaurants (Dimassi’s, Fadi’s), Rice MBA classmates and neighborhoods helped contribute 75 meals, tons of water and about $1,000 worth of basic supplies to refugees,” said Arthi Vasudevan ’21.

As power and water came back on across Houston, Hotel McNair reverted to its primary purpose as an academic building. Bhargava packed up and returned to the Rice Village Apartments on Thursday. Recovering from the stress of the ordeal took a little longer.

“Because of the pandemic, it’s not going back to ‘normal,’ ” he said. “It’s going back to the ‘new normal.’ But I have power and water now, so it’s a little easier.”

Tragedy in the Rice Business Family

A house fire during the winter storm claimed the lives of a student’s mother and three children. 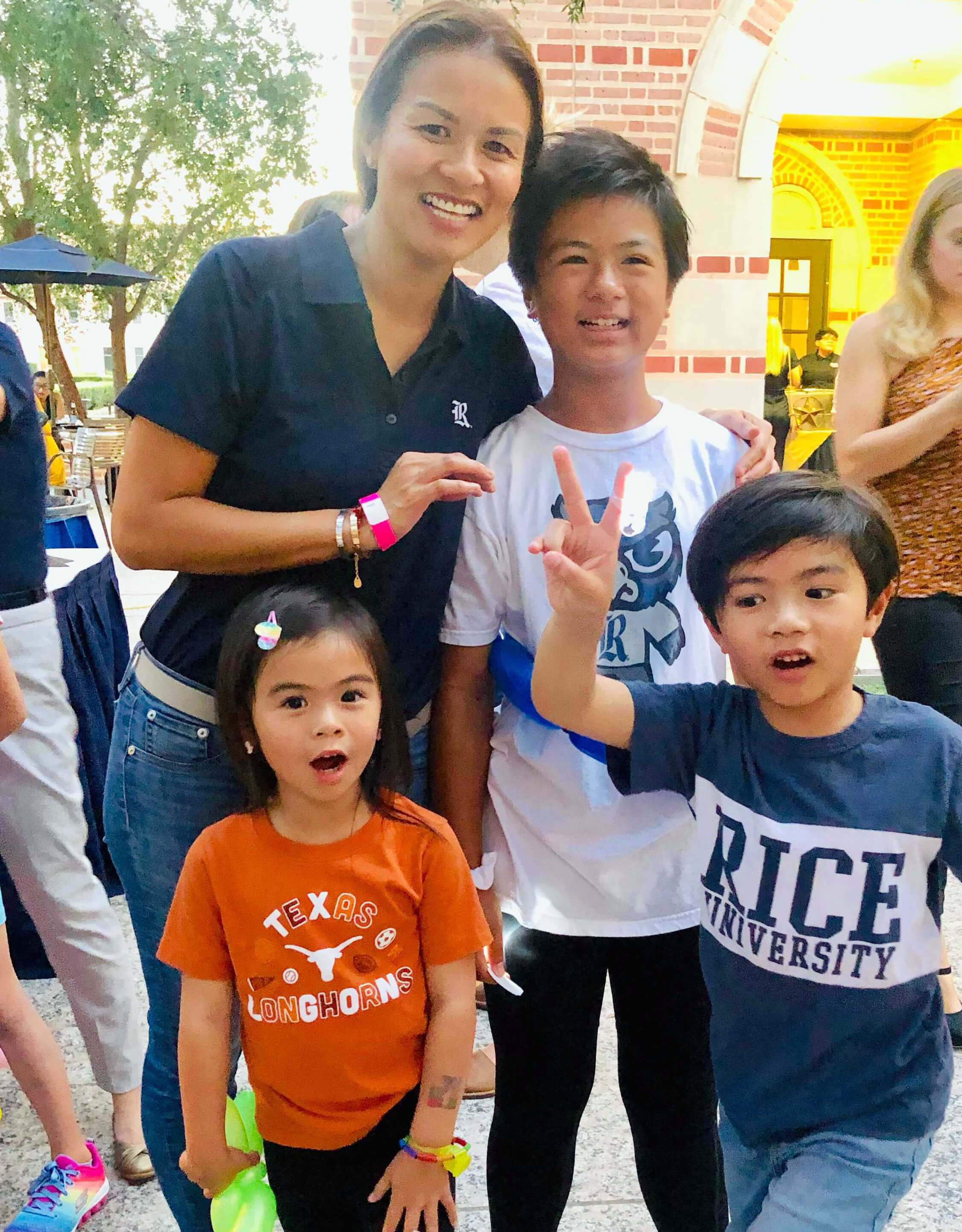 The severe freeze that devastated Texas in February caused at least 25 deaths in Harris County alone, the Harris County Institute of Forensic Science reported in March. Tragedy struck the Rice Business community when Jackie Nguyen, EMBA ’21, lost her mother, Loan Le, and three children — Olivia, 11; Edison, 8; and Colette, 5 — in a fire at her home in Sugar Land while the family tried to stay warm. Jackie was hospitalized with injuries from the fire but is recovering.

“The depth of this loss is unimaginable,” Dean Peter Rodriguez wrote in a letter to the Rice Business community. “Measured against it, our sympathies seem so feeble. Still, even now, we know that sharing our love and expressions of comfort with Jackie is needed and meaningful. I hope that you will join her classmates in the EMBA class of 2021 in their loving support and compassion for Jackie. The hearts and prayers of all of us in the Rice Business family are and will remain with her and her family in this sorrowful moment.”

Jackie’s classmates rallied to help her, providing clothing and essentials, cleaning up from the fire, and donating to a GoFundMe account with the aim of creating a foundation to honor the memory of Olivia, Edison and Colette. By the time of the children’s funeral services in early March, the account had nearly reached its goal of $500,000.

On the Slack channel houston4jackie.slack.com, there’s been an outpouring of love and support from all who knew Jackie’s family — and many who didn’t.

“Jackie, your children truly became honorary members of our EMBA 2021 class this past year during the many hours spent together over Zoom,” wrote her classmate Matthew Goldsby ’21 in one Slack thread. “I will never forget their smiling faces peeking over their computer screens, in particular one day when a professor suggested that grades do not really matter. Their mischievous grins and pure delight in that moment will never fade in my memory.”

“This really made me smile,” Jackie wrote. “I also feel like they were beside me on our MBA journey...  and am just so sad that they won’t get to see us walk. They were so looking forward to it. Love y’all so much.”

Those who want to offer support but don’t have Slack can also email houston4jackie@gmail.com.

In recent years, restrictive immigration policies have undercut industries from technology to higher education, including at Rice Business. Easing those restrictions could help schools and companies attract top talent and regain a competitive edge, experts say.

Letter From the Dean

A letter from Peter Rodriguez, Dean of the Jones Graduate School of Business