During the last semester of business school, Megan Smith ‘22 added they/them pronouns to their email signature. It was part of a long journey  from coming out as queer in college to finding their true identity as non-binary. Each leg of that journey shaped the person — and the leader — they would become. 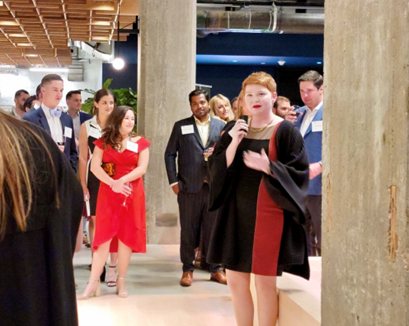 During college at Trinity University, Megan’s friend, Jady — who has since come out as a trans woman — was advocating for LGBTQ+ rights in San Antonio. Jady took on a key role in passing the city’s LGBTQ+ Nondiscrimination Ordinance. Watching their friend secure such a victory for marginalized people while being  so authentically herself, Megan felt inspired and empowered to do the same. They realized that one of the best ways to begin affecting change is by being true to oneself. They also learned that “being queer means being political,” and that their identity in a heteronormative society requires taking action to protect their and others’ rights.

Megan quickly got involved in politics by working for Ron Nirenberg, an LGBTQ+ ally who was running for city council and stood in strong support of the Nondiscrimination Ordinance. After winning that race and a re-election two years later, Nirenberg went on to become mayor of San Antonio. “He never backs down from a tough fight – even when he’s in the minority. He always stands up for what’s right. That’s authentic leadership in my eyes. Mayor Nirenberg and Jady know themselves and what they’re fighting for. They’ve influenced me as the leader I am today,” Megan shared. After getting more wins under their belt, Megan opened their own political consulting firm. After a few years of working to elect leaders with similar values — and earning a 73 percent win rate — they realized that in order to scale their business, they needed to hone their business fundamentals. Where better to learn that than business school?

Before Megan joined the Rice MBA program, they connected with Adam German ‘21, the Out & Allied president at the time, and he introduced them to the LGBTQ+ community at Rice. Connecting with the queer community before joining the program made Megan feel a sense of belonging before starting classes. And when Megan saw an Instagram post about student body president Casey Sherrod ’21, and later an interview with her and Associate Dean George Andrews, Megan was not only positive they had selected the right school – but also that they wanted to serve in a leadership role to further cultivate an environment of equity and inclusion at Rice Business. 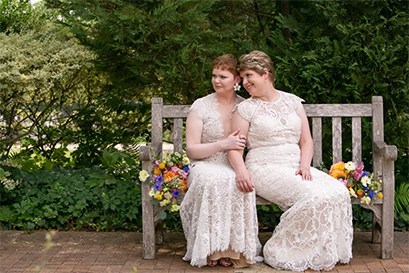 Seeing Casey, a lesbian veteran with a wife and son, elected by her peers as the president of the Jones Student Association (JSA) seemed almost unreal to Megan. “I’d never seen someone who looks like me in a role like that. We rarely see queer folks in leadership roles at all.” It made Megan think it could be possible for them too. Megan flipped from managing campaigns to becoming a candidate themselves when they ran for JSA president. And they won. “Rice Business was at a crossroads – my class was returning to campus after a year online and isolated from one another. We had the opportunity to rebuild the in-person culture and community and double our efforts to make our school feel as inclusive as the student body looks. Those were my priorities.” Megan served as the first non-binary president of JSA and also served as vice president of Out & Allied.

It was during the pandemic that Megan had time to introspect, look at their life and truly understand their identity. Megan also knew that to lead authentically, they felt compelled to – when they were ready – come out again. But how to explain? Megan worked with their leadership coach, Ruth Reitmeier, director of coaching at Rice Business. After many sessions centered on authentic leadership, Ruth  helped Megan feel confident about coming out as non-binary. “I owe a lot to Ruth for giving me the space to figure out who I am. I feel that I’m a better leader because of it. I’ll always be authentically me. Seeing Jady, Mayor Nirenberg, Casey and Adam be authentically themselves gave me courage to be myself. I hope I offer the same courage to others.” Megan’s experience in life and throughout their Rice Business journey taught them that leadership is about empowering others. But the first step is empowering oneself.

You Can Do The Hard Things

Professional MBA '24 Emma Konet shares the reasons behind choosing to get a Rice MBA and reminds readers that, yes, you can do hard things.

Finding a Sense of Belonging

At Rice Business, our tagline is “You Belong Here.” This may mean different things to different people, but when Rachael Sweetman was looking for MBA programs, she chose a place where she could be herself. A place where she felt encouraged to speak up and could advocate for members of the LGBTQ+ community.

Black History Month is a time to celebrate the rich contributions of Black Americans in our community and share stories that advance a deeper understanding of the issues we still face. Check out some of the activities and events offered by Rice Business in celebration of Black excellence this February.